The toddler uses a language of sounds 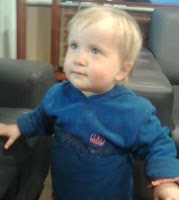 I regret that we did not make more effort to learn the toddler sign language. She still gets by with her pointy finger and lots of grunts. But I realize that she uses a lot of sounds to indicate what she wants. And it works for her, because we understand her… Perhaps the sounds are not such a bad thing, and it works on the same principle as sign language.

Sounds used by the toddler: (I hope I get it right)

“Ah-Ah-Ah” with open mouth – she wants to be breastfed
“Woef” – used for the dog
“grrrr” – ants
“sswee-ssweee” – going to the toilet
“weee-weee” – planes (with hands making a sweeping movement above her head)
“uh-uh” – anything she wants, with pointy finger
Negative “eh-uh” – NO!
“poef” – dirty nappy (with finger trying to pull nappy down)
“s-s-s-s” – fish
“hawrrrrr” – roar used for lots of animals, such as lions, tigers, foxes

That’s about it! It is remarkable that she can do so much with these sounds. Luckily we hear that she is beginning to copy us when we say something…

Playing Friday Follow 40 and over. Check Java for the details at Never Growing Old.