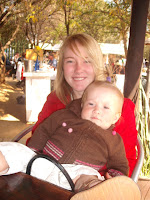 One thing we skipped by having such a large age gap between the children: sibling rivalry! 15 years have taken care of it altogether. Not a bad thing to skip when I witness other parents struggling holding their kids out of each other’s hair...


All we see between our teen and toddler is loads of patience (for a teen that is huge!). The teen does not even show us the same kind of patience! Mieka is allowed in her room, and she can play with her collection of tiny dolls whenever she wants.

Mieka loves spending time with Arnia. Last week the teen was busy at school and we had to go and fetch her later in the evening. When I got home with Mieka she went to the stairs the whole time and called her name, again and again. I had to go and show her Arnia’s empty room, but she was not convinced... She continued to call out her name!

Mieka is big on the tantrum dance at the moment. She does it a number of times a day. The teen showed her how the tantrum dance looks like today. The toddler thought it was hilarious! Not hilarious enough to stop doing it, but they had lots of fun doing The T-dance together!

One of Arnia’s favourite activities is to push Mieka in her stroller through the mall, especially when I am not in the vicinity! She gets a big kick out of it when she sees people making assumptions... She and the BF were walking around today with the toddler, while I was nearby in another shop, and they got even stranger looks!

I love watching them developing a very special bond and love for each other!

Sisters! It is very special to have a sister. I have a sister who is a year younger than me. We are now continents apart, but it is wonderful to be able to have a sister. The older we get, the more we "talk" (thank goodness for the Internet and email and social media).

Today is National Women’s Day in South Africa. Hats off to all the women who have made a difference, and to all the STRONG women! Hats off to ALL of us! 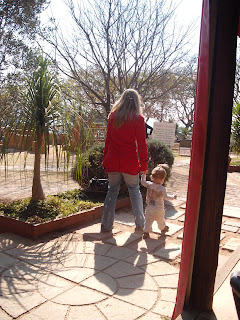