Looking at the stars 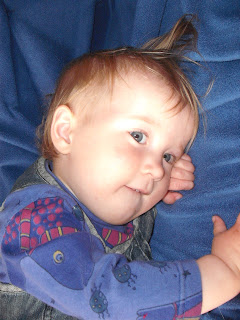 The blocked nose of the past few days made it very difficult for the toddler to go to sleep. More than the usual! Even breastfeeding did not do the trick; because she had to come up for air more than she was able to drink! The flu is a bummer!

She was crying and putting up a fight to go to sleep last night. Out of sure desperation I drew the curtains and blinds and told her we were going to look at the stars!

In suburbia there is not much to see through the haze of lights and smog. We could distinguish a faint glimmer of some stars above the silhouettes of the nearby houses in the complex. We did see two planes going by as well...

It was five minutes at the most, and I heard the faint snore of a blocked little nose... Mieka was gone for the night! I called Dries to come and look at the sweet figure lying on the bed. Very precious!

Dries said tonight he missed her in our bed last night! (We don’t know what we want, do we?)

I have found another tactic to get her to sleep: Looking at stars! Definitely worth trying again!
Posted by Karen du Toit