Fun roadster facts about Mickey and the Roadster Racers

Mickey and the Roadster Racers is coming to Disney Junior, with the premiere on Saturday, 22 April at 9:30 am, DStv Channel 309.
It is a a madcap car-racing adventure series for pre-schoolers led by Disney's No. 1 star, Mickey Mouse, and his pals Minnie, Pluto, Goofy, Daisy and Donald. 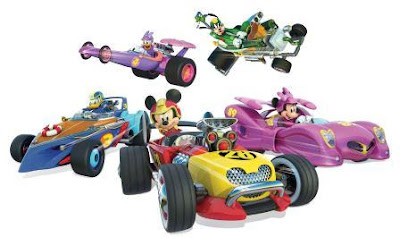 The series takes Mickey and the gang, along with their unique transforming vehicles, on humorous high-spirited races around the globe, as well as hometown capers in Hot Dog Hills. Off the racetrack, Minnie and Daisy also run their own successful business as Happy Helpers, solving problems for anyone in need of a helping hand. Geared towards kids 2-7, the stories are designed to impart social and emotional lessons about friendship, teamwork, optimism and good sportsmanship.

We were invited to a special screening on Saturday of Mickey and the Roadster Racers. Little Miss is already 8 years, but she enjoyed the four episodes just as much as the rest. She was quite bummed when the last episode got stuck, and we were told to catch the last bit on Disney Junior. (It's too long to wait! ;-) ) 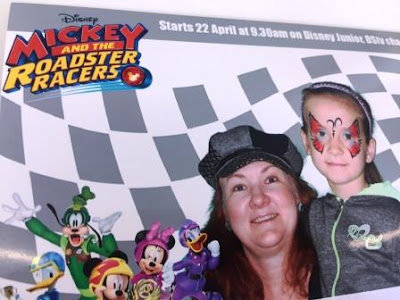 All of the transforming vehicles in Mickey and the Roadster Racers are inspired by the characters' personalities.

All of the numbers on the Mickey and the Roadster Racers cars have a significance to each driver.