Bring the family together with board games #PrimaGamesFest

It's winter time, and more time for being indoors, and spending time with the family. Board games is a great way to spend quality (and quantity) time together. Miss Fine has been working on her life skills, and playing board games is a great way in helping her to manage the melt-downs. We can already see a marked improvement when we play board games together.  We will definitely be doing it more after the exams, but in the meantime it is also a great stress reliever when taking a break from studying.

Here's how you can win Rummikub with a Twist, with extra Jokers to add more fun and skill to the game. As far as board games go, Rummikub is one of our favourites, as the rules are not that difficult, but you get more skilled with each game being played.


Prima Toys just launched their first ever Games Festival. The festival highlights all their hottest game and board game products from the traditional ones like Rummikub and Snakes & Ladders to the brand new King Pong, Boomblast and Flipside! Parents with toddlers can look forward to products such as Frozen matching game, Peppa Pig Dominoes and the hugely anticipated L.O.L. Surprise Game. This year there really is something for everyone!” says Chiquita Patrizi, spokesperson for Prima Toys.

The hottest Prima Toys' Games Festival products to look out for:

For Toddlers and Children


Rummikub games are available at leading toy stores and retailers.

RUMMIKUB WITH A TWIST GIVE-AWAY: 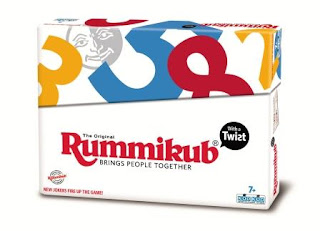 1. To win a Rummikub with a Twist board game, comment below with the names of two of the board games that's part of the Prima Toys Games selection this year?

2. Share this competition on any social media platform, but comment below and tell me where you shared with your handle. That will earn you an extra entry in the competition. (It will be checked)

Copy this for easy sharing: https://ctt.ac/rgbhI


This competition will run for a week and end on 5 June at 12pm. The winner will be announced here and on MomAgain@40 Facebook Page.
This competition is open to South African residents only.
The prize is not transferable.
If you have won here in the past 3 months you will not be eligible to win this competition.