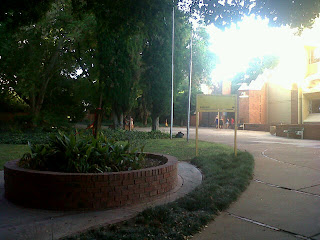 I am writing again about the First Years at university and their apparent "willing" participation at age-old rituals of initiation.

The first semester has been especially tough on them, having to cope with their studies, as well as having to accommodate all kinds of "requests" being in a residence at university. \
As part of the orientation initiation!

I still feel that I have failed my child because I had to ask her to stay on where she was.
Unfortunately we don't have the funds to buy or rent outside accommodation for our child.
We know of many parents who could afford it and who had to take the step of buying a flat and organised a vehicle for their children. I really would have done it if we could!

In the end the student had to "survive" and had to cope with bullying behaviour. She was forced to avoid certain eating areas because of being afraid of bullying behaviour of seniors. Up until now they have not been discharged from the whole initiation practise.
Luckily she was allowed to swop room mates, and it has contributed to a better studying arrangement. (Her current room mate is doing the same degree.)

The previous weekend they had to stay in to beautify their floors. They had to sell self-made stuff to generate funds, and they spent hours and hours in making the decorations.
They were very proud of their handiwork!

They also had to "zoob" for a "mother" in their residence - it means they had to flatter and try to win the favour of the person they wanted to be their "mother".  I got photos of the student with a dummy in her mouth, very happy with standing next to her "mother", a senior in the residence!

It has left me with a bad taste in the mouth!

I do not have a problem with having a mentor in the residence, but I think it is not necessary for them to spend time and money and to wait two months before the process is in place. Seniors could have been placed in mentoring positions from the start to help them cope with first year demands, and helping them with their studies. The first semester is done and dusted already!

The initiation has been "successful"!
In the end they have "willing lackeys" who are "happy and proud!" to be in the residence where they are!
(The indoctrination has been complete!)


My wish is that this year's First Year's will stand up next year and say that they won't be part of the initiation ever again!
Apparently it is the second year students who are the worst!

My wish is that next year the second year students will say:

It takes just one year to break this sick practise!


Orientation seems a lot like initiation
This is not initiation!
Have we failed our children? - initiation