Hell is standing in a queue for a driver’s licence 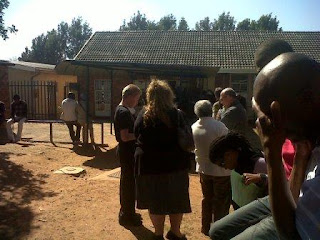 Today was supposed to be part of a long weekend. We’ve got a public holiday tomorrow.

I was supposed to quickly go to apply for the renewal of my driver’s licence, before I had the rest of the day to myself... Ha-ha-ha! (Murphy, you are very cruel!)

Because the Teen applied for a learner’s licence just a while ago, she said she would accompany me! (She’s the one with the superior knowledge of testing stations!)

We should have been there at half past seven already... (Big mistake!) Only thing we did right was to drop the Toddler off at my parents!

We went to a nearby mall to get id photos and an eye test. The thought was that we could skip a queue...

We started at Krugersdorp Testing Station; because somebody told us that it goes quick and easy there. When we arrived, there were two long rows already. Especially the queue for the eye tests which was not moving at all. But we were still smug! We have the paper for the eye test... I was busy filling in the form for the application, when the queue was changed into one, and we were at the back, even behind the eye test queue. We were told by some of the people in the queue that they came from Randfontein were the queues were even longer...

(We should have stayed there!)

We decided to go to the testing station where the Teen got her learner’s! Driving over 20 kilometres, only to find that they don’t do driver’s licences...

We drove to Florida Testing Station to find a queue going out the door as well. We were also told that we still had to give our fingerprints, and that we would still have to stand in the same queue.

We got there at twelve, and we left there at four. The queue moved at two paces an hour, with us having to stand in the shade first (which were too cold), and then the sun (I got sunburnt!).

After half an hour you start to realise that you should have been here much earlier. You contemplate leaving the whole time, but my driver’s licence expired today... (Never leave it to the last day!!) After an hour you can’t leave, because you have invested too much time there already...

Just before 4pm they came out and told us that we would not be able to pay, because the people were cashing up for the day! Some ugly words were thrown from the back, but the people of Power just shrugged! There were about four people in front of us. We decided to stick it out, and got our fingerprints and papers onto the system... Now I have to go back on Wednesday morning to pay!

It is amazing how much camaraderie build up between people standing in a queue. I think that this is where nation-building is taking place day by day!  Forget about singing songs or sport matches!

There is nothing that gets people talking, laughing and helping each other as much as having to stand in such a queue.

It is Hell, but we all feel the same towards the people in Power! We have found the common enemy!
Posted by Karen du Toit