What have you done with our toddler? 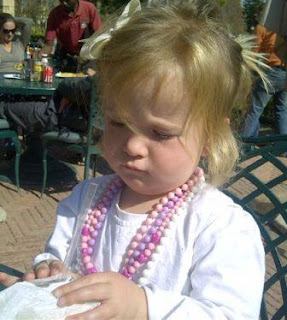 The Terrible Two’s! What have you done to our formerly easy-going toddler?


You would think that the tantrum dance should be getting less when she is nearing the age of three. I’ve got NEWS!

NOT! It is getting worse!

She does not stop.

She does not get distracted!

She does not respond to threats!

Time-out does not work!

Explaining does not work!

A light tap (I’m sorry to say!) on the nappy does not work! (Bad bad parents!)

The other night as an example: The Toddler was bathed and was ready for bed. She wanted juice, but juice in an open bottle so that she could pour it from into another cup! That is a definite mess waiting to happen… If it had happened earlier, it would have been negotiable! But she had been bathed and dressed for bed already!

We now have a joke between us. When she goes into repeat-mode, we say “Push the reset button! Restore to factory settings!”
Then Hubby presses her on the back, and it makes her laugh for one second, before she continues with the whine…

She has not been feeling well the past week (Tuesday catch-up), and I hope that could have been the reason? (Please say it is so!)

The Terrible Two’s turns her into a whining monster!