The Toddler is down at 8 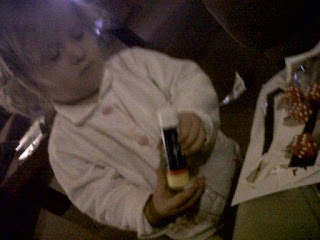 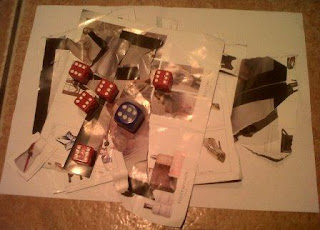 We had some sleeping issues during the holidays last week.  As soon as the regular routine gets shifted or moved along by a couple of minutes hours, everything goes out of the window!

No new revelation here! We all know it! It is our own doing (as parents!) when we let it slip... We were driving around again on Monday night while she was full of beans, singing songs...  While we were feeling like zombie parents driving ourselves into a coma...

Luckily when she went back to day care this week she was extremely tired, and it is now the second night that she went to bed at eight AND fell asleep immediately... Back-to-reality does have its merits for tired parents!

The photos are evidence of some of the late night art being done by the Toddler last week. She starts by cutting up pictures from magazines and making collages. Even the dices got a place on the collage. I think it is pretty nifty because she does it all on her own!
(The same as the collage on her sketch pad as well.)