It was local government elections here in South Africa, and we took the Toddler along. Luckily we went early and were out of there within 35 minutes after the polling station opened.

The Toddler entertained us while standing in queue. She was greatly impressed with the whole stamp idea, and I had to give her a mark on her thumb at home as well.

She is talking non-stop now, and when we arrived she informed us immediately that there is a woman with "blood" hair. The lady's hair is very red, and Hubby had to confirm and tell her "Yes, the same as Mommy's". The lady was okay with that... We hope!
But later she informed me there was a lady with a "snollie" (snot) in her nose. I don't know if the lady was touching her nose, and I did not want to look. The Toddler was adamant and she told me three times... I never turned around, and hoped the lady in question did not hear! The embarrassing things a toddler say! It has started big time!

We had a bright sunny day after that! Great weather for a braai! 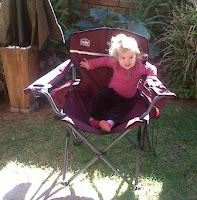 And a great way to catch up on some sleep... 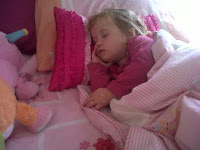