The Circus is as exciting as ever. A circus, called Dream Circus, parked on local school grounds here, and we got the whole deal with popcorn and lights!

It was the Toddler’s first! We struggled to get her off her chair in the beginning because she was apparently under the impression that it is “show” enough to be able to sit on her own chair – happily clapping along.

When we got her standing to be able to see, the clown came too near to our side, and she was not impressed with him for the rest of the show...  I can’t blame her. The clown was scary to me too... 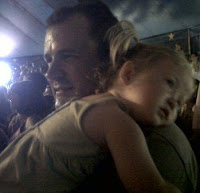 Luckily Circus does not mean big animals anymore. It is only dogs, doves and a really big snake. The acrobats and the trapeze artists are very good. 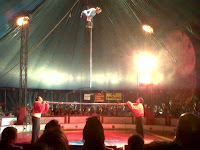 The highlight of the show was the highlight – the strong man act: throwing and catching of three heavy heavy copper (?) balls.  A muscle-builder from the audience struggled to pick up the balls, where two of them were picked up by Mr Strong Man’s pinkie.  It was announced as the Award Winner of the International Circus Star Award.

Entertainment at its best! I will definitely take the Toddler again!
Posted by Karen du Toit