I want to fire the day care! 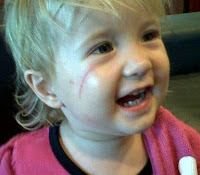 This is how the toddler looked when I went to fetch her at day care yesterday afternoon.

Two of the day care people immediately came over to tell me about the scratch. I first said it was okay, because I thought we were talking about the little graze... Apparently the toddler was climbing a tree, and fell out!  ?? We did not even think she would be able to climb a tree. And where were the people that were supposed to be looking after them?

But the scratch mark is huge! Now we don’t think it is okay at all! Dries said he will talk to them today. To make them understand that we think it is NOT OKAY!

We know that toddlers are prone to accidents, but we HATE the idea that it happened where somebody else was supposed to watch.

Should I fire the day care? (I must confess that I get the urge on a very regular basis.)