The toddler is 23 months and saying her own name 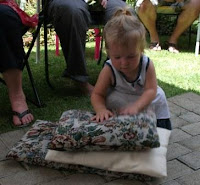 One month, and I am getting my life back. No, joke! We are never going to get our lives back. (Not that we want to...)

I have always held the magical number of two years as a milestone. That is how I remember I felt with the teen when she was two. I felt I got some sense back of me. They are more independent, and you are able to do more of your own stuff again.

The toddler started at long last to say her own name this week! We noticed that we could get her to say all the names of people in her life, except her own name. We were worried for a while. Now when she looks in a mirror, she says “Mieka”! And she exclaims “Mieka” when she sees herself on photos and videos.

The toddler loves going to the tiny gymnastics, and usually she is a big star. But we noticed that the not crawling had a big impact on her movement on Saturday. They had to crawl up and down and over. Every time she sat on her bum, and did the crab creep (again) when she actually had to crawl or jump over or off! Luckily we have the tiny gymnastics every Saturday to help with it!

The vocabulary is coming along at a great speed. She string together two or three words, and sometimes I hear that she is even getting creative with her use of words. She loves her Goggatjie DVD.  This morning she woke up, and asked for Goggatjie, nothing else. She called me “Mamma-tjie”. The “-tjie” was something she thought of on her own. (We have never used the word “Mammatjie”. )


We had the whole family at our house today, and the toddler had a ball with her grandfather and grandmother, as well as her uncle visiting from London.  She was crying for her grandfather when they had to leave. She is used to seeing him every day at the day care because he drives around the children in the afternoon. She cries when he has to put her down. Only sometimes he can placate her by saying that he needs to go and pick up children...

The toddler did not have her regular nap-time, and she was out at half past six tonight. Her regular nap-time starts at twelve at the day care. She needs that nap, and I have seen that she sometimes take two naps during the day when she is with us. When we bypass the naps she gets very cranky!

Off course we enjoy her even more! She gets cuter and cuter, especially with the use of words.

Where does the cuteness stop? Even while they are toddlers, or after that?
(I can’t remember.) Not that I am not looking forward to the other phases, because I loved all the phases my teen went through as well!
Posted by Karen du Toit