I wore black, and I will be doing it again 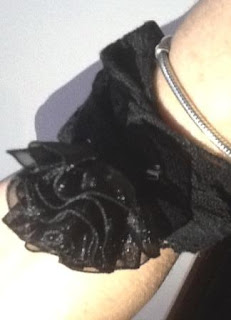 I believe that it does not really help marching against something, and that it actually just keep on focusing on the negative! Mother Theresa also said that she would always march for peace, but not against violence.

But I wore black in solidarity with everybody who thought and pleaded and shouted against the senseless murders and the senseless rapes of women. Women who most recently got a face through Reeva Steenkamp and Anene Booysen.

Some of us are "luckier"or "smarter", and we think we won't be confronted with it.
I was one of them!

I did not know when I got married that I would be afraid in my own home...
That I would put up a fake smile because I was shown a gun with a silencer...
That I would go in hiding because I was afraid of my life and the life of my child...
That I had to tip-toe around my own words, afraid that the wrong word could trigger a violent verbal outburst that would explode...

That's why I am an advocate for initiatives like Speak Out.

There are reasons why you should not stay, and the earlier you acknowledge them and make a decision to not put up with unacceptable behaviour, the better for all!

We are all stronger than we think we are! We can say no! We can walk out! We can stand up, and we can speak out!

We can only make a difference in our own lives, and the lives of those we touch, but one step at a time!
We can do better than this!

We can show our children there are better ways!
Our girls should not tolerate abusive behaviour from their partners.
Our boys should not be shown the way to handle life is with guns and violence!

The only way is by living the way we want to see the world!
We cannot stay in an abusive relationship, and then try teaching our daughters differently!
We cannot keep guns, and live aggressively, and not show compassion. And then think our boys will do it differently!

It starts with us...