All birthdays should come with party packs, even at 74 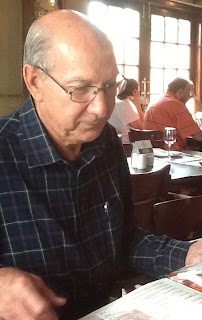 The Little Missy believes that all birthdays should come with party packs included.

She checks out the party packs when we arrive at a party, and it takes a bit of convincing before she leaves it to the end of the party.

She asks for party packs  even when we celebrate a 40-year old birthday, and yesterday her Granddad of 74 also had to explain where the party packs are.

We had such a chilled weekend, and celebrated a belated birthday, which we missed because of the accident on the highway in December.


We also celebrated another year yesterday with my Dad who is 74 now!
He looks great and he can still go forward, but says that it takes a bit of motivation in the mornings.
I hope we celebrate many more with him!

During each celebration we become much more aware of how sad it is to not have family nearby.
We miss the family members who are on different continents, and we now also have a Student who is off doing her own things at Varsity!

It is not the same being able to communicate on Skype and Facebook and emails! (Just saying!)
And it is not getting and feeling better with time passing... NO!


And the rest of the weekend we got a barrage of Missy talk. Non-Stop!

She still has the pink house in the clouds, with two dragons and three dogs. Her little sister and two brothers are staying there. Someday she might invite us there. There are two trees nearby the house that they had to cut down, because a grown-up used too much toilet paper in her loo...

How was your weekend?