First day at a new school 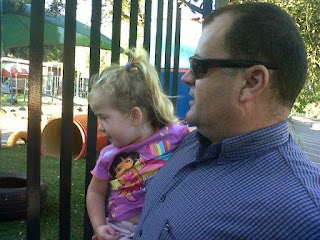 Finally, the first day at a new pre-primary school for The Toddler!
She is starting with a 4-year old group of kids.

I've had nightmares about it...

It feels like I am sending my child to real school for the first time! Everything is structured and organised.

But it's a beautiful place, and the teachers are qualified and very welcoming!

We made specially sure that The Toddler got enough sleep by doing a long sleep drive last night. It worked!

Until there was thunder and lightning! And she woke up again... (I felt like cursing the weather!)

So this morning she was still sleeping. She was supposed to eat something because they don't do breakfast at school anymore...
She was sleeping the whole new route we have to travel to school as well!

We were there early, before the gates opened, and showed her the play area through the fencing!
She showed some interest...

I also tried showing her what I packed in her bag, but she told me to put it back again! (*She's sorted!*)

We went to her class, and looked around. I was thinking of spending some time with her checking it out, but when the teacher tried to take her, she started to cry...

That's when we had to leave... With me crying as well!
And the Head of the School walking past with a smile and saying: "It is always the same in the New Year!"


I hope she's going to be okay?
What is a good time to phone the school? 10 o'clock?
Posted by Karen du Toit