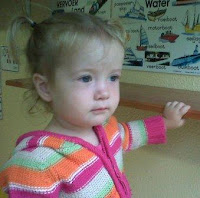 One would think that by now the Toddler would have stopped throwing things. Not so! It is one of her favourite pastimes!

I had a look on Google, and apparently it is not a strange phenomenon for our toddlers.
They throw stuff and food and everything! Still getting to grips with the gravity of earth, and also challenging their control over their world.

The most frustrating is when I am driving and the Toddler is in her car seat. She begs for a doll or a bottle which is just out of reach. I get it to her and warn her not to throw it again... Which of course she does immediately again! And then puts up a terrible toddler tantrum shriek!
That's when I start singing "Mamma trap die petrol..." (Mom step on the petrol...)
Posted by Karen du Toit