The T-dance - the toddler and tantrums 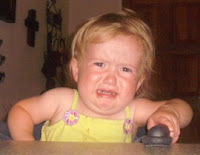 The toddler goes into tantrum meltdown a couple of times a day. I like to call it the T-dance. The face goes into a wail. She stamps her feet. The very LOUD shriek!

Shame! It must be so very frustrating not to be able to communicate. Or to find that not everything goes according to “Toddler”! The toddler begins to realize that her universe does not revolve around herself... Come to think of it... It must be a huge shock!

We try mostly to redirect her attention. As soon as she is focused on something else, all is well again. It usually happens within a split second!

At the moment she loves “washing the dishes” with us. As soon as she sees that one of us is busy in the kitchen, she starts by moving the foot rest that we usually use for her to stand on. When we try to tell her that we are not busy washing the dishes, she goes into the T-dance. But when we start playing ball with her, or show her the horsey to ride on, all is well again...

I do not think the tantrums are such a problem that everybody says it is. Maybe we are lucky that Mieka does not go into complete meltdown. A friend complains that her son hits his head against the wall! That sounds a bit scary. We try not to let her T-dance for too long before we help her to focus her attention on something else. I think that is a good way of dealing with the Tantrum! We tell her “No!”, and “That’s not nice!” We don’t give her a hiding or discipline her in any other way when she has a tantrum. I don’t think it is necessary, and so far it has worked!

What is other ways of dealing with a toddler throwing a tantrum?

Related posts:
The toddler is 20 months
The shriek
Posted by Karen du Toit