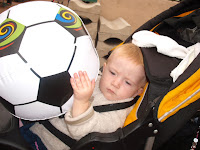 The 2010 FIFA World Cup is around the corner. Yeah! Something is happening here...

All over we have been doing Football Fridays for a couple of weeks. We are dressing up to fit the theme at our workplaces. I even have a Zakumi (the official FIFA mascot) t-shirt which I wear every Friday. We have seen the diski dance being demonstrated, and the Vuvuzela is heard (annoyingly) everywhere!

At school the teen has been dressed in the football colours since the previous Friday. She organised a yellow t-shirt in the official Bafana Bafana (South Africa’s official team) colours. But she decided to buy herself an England jacket over the weekend. She wanted to wear it with the England scarf and pet she got as a gift from my sister in England. She came home very angry when the principal announced that they could only wear yellow on a Friday. Now she dislikes the principal even more than before... (Smile)

I felt very sorry that she had spent the money, but salute the principal for only allowing yellow!

There is a lot of bad vibes going around here in our country, but there is something positive building here with the World Cup coming to our part of the World!

Thumbs crossed for a bit of goodness bringing us together again...

(Photo: Mieka with a plastic 2010 football. She loves playing/kicking it)
Posted by Karen du Toit