Our little Princess at 16 months; an update 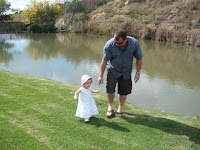 (The detour at the hospital yesterday, with the abscess, got us a little bit side-tracked.)

- I am a little bit worried about the language development. A friend said she should be speaking 10 words by now. Let me count: Mamma, Pappa (daddy), tatta, hello, Arnia... She is even calling every other object “pappa” now? And the rest is mermaid-speak. Should I be getting worried?

- The finger still points and she now comes to fetch us to walk with her. Not that it is always clear what she wants. It seems she is happy to go in any direction, as long as we are going with her.

- The new class at day care has definitely “turned on a few more lights”. She seems to be more interested in drawing, building puzzles and reading. It was a good thing to have moved her from the baby class. They also don’t have any problems with her going to sleep on the mat. She spends two hours sleeping in the early afternoon, a bit longer than the rest of her friends. (But she used to sleep twice during the day in the baby section).

- I am still breastfeeding. The two year goal is within reach! I think it is a comfort thing during the night. She loves to sleep while being latched on. I am treasuring these wonderful bonding moments. After I have seen the Avatar movie, I think of breastfeeding in the same context as the species on Pandora who latches on to the Tree and the animals with their “hair”.

- I am struggling to get her 100% healthy. She has missed the MMR vaccine at 15 months. It seems that she has an allergic type of sinus problem. I think milk is number one suspect, but I have looked on the shelves, and don’t think that soya is a good alternative. I feel a bit unsure to cut it from her diet at this stage? (Which a friend suggested.)

- She is sleeping much better. The problem is getting her to fall asleep. I feel that 8-9 is a bit late, but that is usually the time she goes “down”. She wakes up once or twice, and sometimes she goes right through until 6. I hate it every day I have to wake her for day care. Powerwoman is allowed to say it, and to keep on hating it! Not nice to be a working mother when you leave a sleepy baby in somebody else’s arms...

- She loves shoes! She has no problem in the mornings to sit down for us to put on her shoes. And she doesn’t take it off until she goes to bed at night. It was a struggle yesterday to take it off in hospital. She was trying to put it on again the whole time. She is a girl, for sure! (Smile)
Posted by Karen du Toit