What makes pirates being afraid? - another Afrikaans app for the iPad 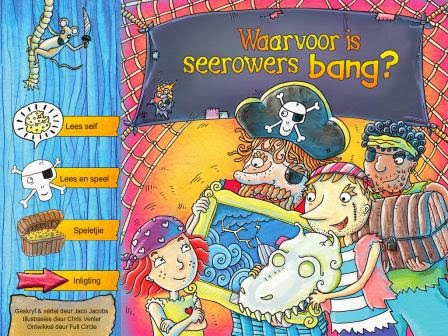 I found this cute adaptation of an Afrikaans book, "Waarvoor is seerowers bang?", as an application for the iPad.

Arrr! Everyone knows pirates aren’t afraid of anything! But when something on deck starts smelling worse than the breath of a hammerhead shark, Sanmarie suspects there might be one thing that makes her fearless pirate dad and his crew tremble in their dirty boots ... This hilarious, rip-roaring, rhyming pirate adventure by well-known children’s author Jaco Jacobs comes to life on your iPad – thanks to innovative animation, fun music and lots of interactive elements."


The story is written and narrated by Jaco Jacobs, with the illustrations by Chris Venter.
It was developed by Lapa and Full Circle cooperation.


There are three features available:

- Children can read the story by themselves.

- The story is read to them and they are able to interact with the animations on the screen. The animations include touch elements, flickering green arrows and an extra sidebar with extra character comments.

- There is also a puzzle game available.


This is definitely the small fee worth, especially since the hard copy is three times the price of the application.

I could not wait to hear what makes a pirate afraid!
Very cute!