Parting with a bear... Too special! 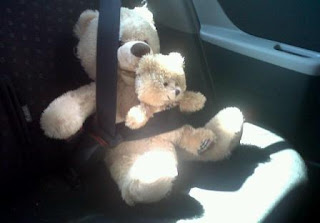 The Toddler had to pick one of her own bears to give to the "children who don't have bears."

It proved too difficult a task!

When I suggested a bear for her to give, she was adamant that it is a very special bear.
Each and every one!
Although she's got a large number of bears that sit on bookshelves in her room, she could not find a bear that was not "special".
(I recognise the hoarding gene. It seems it has been passed on!)

At one stage she pointed to a bear that I could take!
I was very proud, but it was short-lived...

The Student reclaimed her bear when she saw it was the bear that the Toddler had selected...

So we had to go to Reggies for a bear, and the smaller bear was one donated by the Student! 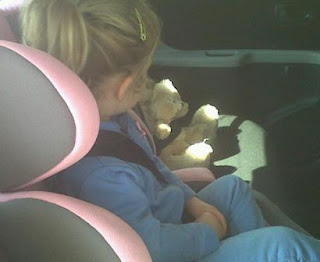 The photos were taken in the car, on our way on Saturday. The bears had to be strapped in as well!

Bears for the Teddy Bear Clinic