She can fend for herself! 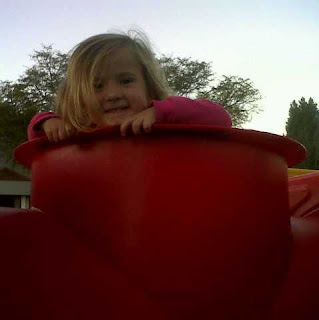 We sometimes worry about our children and how they are able to cope in a world where they are out on their own. Especially for working mothers who have to leave their children in a setting which are not their homes...

Especially since they are so young having to cope on their own!

(No, its not a blog post about working mother's guilt!)

The Toddler showed some great coping skills when she talked herself into an extra mural activity at school last week...

During the holidays there was an extra class each day for paid activities for the children that were not on holiday. I also paid for the pottery class, but was worried that the Toddler was looked over that day and that she did not attend the class.

It is not always a good idea to ask if she had attended the class. Because she said emphatically "No! The teacher did not want her to go to the class!" when she was asked.

Coupled with receiving no article afterwards to show I though I should check up on it... Because I have paid already!
In the meantime it was established that she had attended the class and that the pottery item is on its way...

The Toddler must have heard our discussions on the matter, because she pitched up at the class the next week (which she is not signed up for), and announced that her mother has paid already!

The lady says that she can never say no to a little one when they pitch up for the class!
So Mieka was allowed to make a pottery item!

And now I have signed her up for the rest of the term for pottery classes.
(Sucker!)

I believe that they should not have too many extra-mural activities in a week...
Now she is signed up for 4.
Do you think it is too much?