A new addition to the family 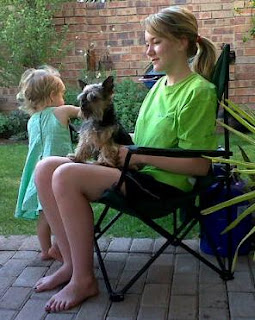 We already have a dog. A dog that we thought is a Miniature Pinscher, but turned out to be something between a Dachshund and a Pug. She’s got all the irritating characteristics of all the breeds. For example the loudest bark ever for such a small dog, and she uses it All the Time!

But she’s our dog, and part of the family! We feel sorry for her being at home during the day when we are not around. Dries wanted to get another dog to keep her company, but I said that one was enough! Because Petite is definitely ENOUGH!

But the clicker dog trainer of earlier this year sent out an email earlier this week that her mother has to get rid of her dogs. One of the dogs is a Miniature Yorkshire Terrier! It stated that the dog works well with other dogs.

Guess what? We got ourselves a new addition to our family: Benji, the Miniature Yorkshire Terrier. Apparently there were ten responses of people who wanted to take the dog, and they selected us as the new family!

Now we’ve got another male in the house! (See also weekend photo of him sitting on my neck on the way back from his owner.)

He is the cutest most chilled-out dog ever. Petite Peu was a bit thrown by this small little thing prancing around, but Benji did not seem to be bothered at all. He spent the most of today marking his new territory. We did not know a small little dog could pee so much. He also marked the teen’s room! We think it is because Petite Peu had a few accidents there when she was younger...

Tomorrow our vet neighbour is going to clean his teeth, because he’s got the worst teeth ever! (Is that a flaw of the breed, or did he get too many snacks from the previous owner?)

Hope we haven’t got ourselves twice the dog trouble than before? Thumbs crossed!

But he is super cute, and the toddler is impressed with the dog that lets her stroke him, and does not want to chew and bite the whole time...
Posted by Karen du Toit