Little boys are a different species

I think all boys are made of something totally different than little girls. They are of a different species. My sister-in-law asked the other day if all boys are as busy as hers. I don’t have a boy, but I said yes immediately! When I compare my friends with their boys, and my girls and how they behave, I can only come to the conclusion that there is no comparison!

A little boy visited us the previous Friday with his mother. The children were playing in our vicinity, and they were as busy as little toddlers are supposed to be busy. We were watching them the whole time!

His mother noticed at one stage that he had a red mark on his cheek that was not there earlier in the day.  The mark became swollen, and we had to conclude that he must have burnt his cheek against the gas barbecue outside. Horrors! Luckily it was only a little burn, and by the next morning the mark was almost gone... But, horrors! It shows that we need to watch the boa boy much more closely! 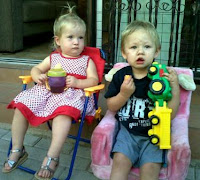 The little man must have burnt himself when he went too near the barbecue. But we did not hear a peep or a squeal! Not a complaint! He just took it in his boy stride, and went on playing. Boys are usually much more interested in fires and barbecues...  For the rest of the evening we did not see him go near the barbecue!  Hopefully he learns a lesson! Hopefully!

The two toddlers are happy to play next to each other, and as long as there are two chairs or two of whatever toy then they get along just fine!

What is your experience with little boys? Are they really that different from girls? I think so!
Posted by Karen du Toit