Soccer fever and… we missed it! 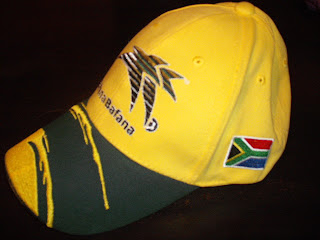 Even if you don’t like soccer, you can’t help being caught up in World Cup fever! As a host nation there is an electrifying air of goodwill and optimism here! Especially after we got a goal yesterday and played to a draw against Mexico!

I had a bit of a strange afternoon. We missed most of the game! (Horrors!) Luckily there are the highlights…

We could leave from work at 12 already. I was waiting for Hubby who went to watch the game at his boss’s house. He phoned me just before the game to tell me that he was going to watch it on his own, because the wife was not feeling well. She just had her last chemo treatment the day before!

I resigned myself to watch the game on my own with my two daughters (feeling sorry for myself), when Hubby phoned again and told me that the wife was feeling better. He came to fetch us, and the first part of the game we listened to in the car. Tshabalala scored his goal while we were on the road! Mieka even caught on to our excitement, and she was screaming her Mieka babble to us. (Very cute!)

Boss was dressed in yellow soccer gear. But there was no television screen or plans to watch it in the house. When I asked about it, I was told that he is not in the mood for the soccer! (What? No kidding!) So we missed the last part of the game… How strange is that?! (But we still love you, Boss!)

Luckily there is another game coming up on Wednesday. South Africa against Uruguay!
[I love Cat’s post with her family dressed to the teeth! Nice!]
Posted by Karen du Toit