I downloaded KidChart, the second of 10 iPhone apps that help with discipline.
I have to download the apps on my iPad, since I don't have an iPhone, but it seems to work just as well!

- KidChart is a very simple and easy app to use on the go!

- As a parent who like a more positive parenting approach, I would only try to focus on the smiley face, but the user could use it both ways.

- I like the fact that you can add behaviours as you go along. 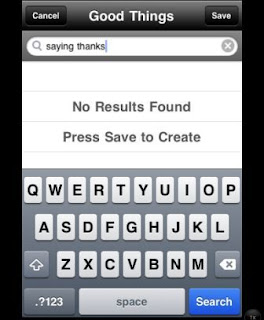 - The app generated a very nice certificate which I like, attached with the specifics in a next view. 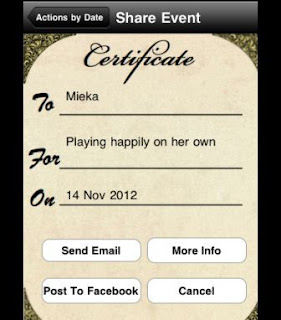 - What I don't like is that you only get the wording when you share. Not the attached certificate. It would have given it an extra edge. It would also ensure that other people know where it is coming from. Now you only get an update with no explanation.

- You are also able to link it to DropBox, which helps to keep the accomplishments safe.

- It stores the "certificates" and "warnings" by date so that it is possible to reflect on it later. That gets a thumbs up from me!

I don't think I will use this app that much, but I will let you know in future when I change my mind.

I have send feedback to the developers about including the certificate with more information.

- 10 iPhone apps that help with discipline