A night at the ballet - Don Quixote 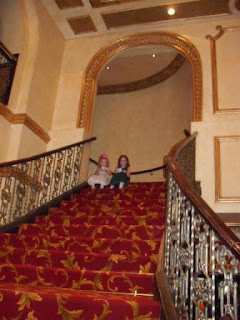 We took the Toddler to her first classical ballet, Don Quixote, at the Lyric Theatre at Gold Reef City on Friday night.

We were worried about the show starting at 8:15, which is her usual bed-time. Also that she would not be able to sit still for the duration of the show.

The Toddler loved it. She sat transfixed for most of the first pat, with only her legs rhythmically moving to the music.

The second part of the show got a bit more challenging.
The Toddler was so impressed with some of the moves, she wanted to practice them right there and then. I had to push down the little legs flying past our heads, and hoping the people in the back did not mind the legs and arms flying up in the air. 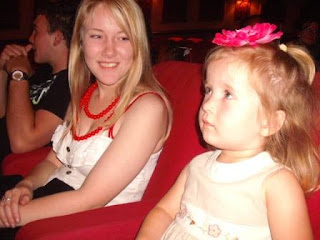 She sat through the whole show, and was skipping away after that. I am planning to put up a Movie Clip Monday tomorrow to show her happily walking with her dad after the ballet.

She was up at seven the next day, and there was no problems at the school concert.
She told us she is a sheep, and we were checking all the little sheep on stage...

It turns out she is an angel in the concert! (What's up with that?)

Of course, she was very cute, singing and clapping away on stage.

She saw me once in the audience, and we could see her mouth "Mamma!"
We realized again that she is definitely older, because there was no sign of the crying of the previous year with her first concert!

She is a big girl now!