18-year olds can get breast cancer 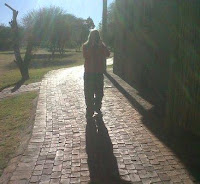 Two years back we had a big scare. The Teen discovered a big lump in her breast after they had a talk about breast cancer in their group at school.

I immediately made an appointment with the local GP who told us that she suspected it to be a fibroadenoma, but that we could have it checked with sonar. We had the sonar done as well, and they confirmed it! We made another appointment with a gynaecologist, who told us the same thing! Sigh of relief!
We followed it up with a return visit last year to the gynaecologist, and she told us that it was not necessary for us to return...

That made us feels uneasy!

A colleague of mine went through a whole six months of worries about breast cancer where she had a specialist tell her that she could just leave it as is, until it turns into cancer. (Yes, really!) She did her homework, got a second opinion, and had a double mastectomy to clear her of definite breast cancer in the future! If she had listened to the first specialist, she was a definite time bomb for the dreaded C! Now she has been declared cancer free, and she can continue with her life! (I am definitely not using the right terminology, and there is some more of her journey here.)

We saw the same specialist today (Waiting for the doctor). She told us that it was very necessary for us to have a regular check! She has seen 18 year olds with breast cancer! The Teen should have a yearly check and sonar every six months. Fibroadenomas stay fibroadenomas, and they never change into cancer, but the size of it should be monitored. It can also become painful. (We were not told this before today!)

She also sent me for sonar, and I should go for a mammogram six months after I stop breastfeeding.
I was not there for me at the appointment. But Dr Benn asked when last I went. Errrr...

I was reminded that we should listen to the little nagging voice, and when in doubt, always go for the second opinion! Always!
(And there are some scary cowboy doctors out there!)


When last did you do your breast examination?
Posted by Karen du Toit