Worse than a toddler 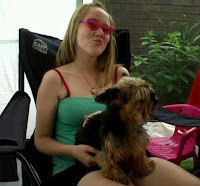 I saw the hash tag #worsethanatoddler on Twitter by 5minutesformom. I had to smirk smile at myself! It describes our dogs just as well! They are worse than the toddler!

And we have done it twice now! I don’t know where we got the romantic notion of a little dog that sits at our feet at night, and who comes when called, and go out and pee in the rain when ordered? Our dogs do not bark on cue! Never!

The new addition, the Miniature Yorkshire Terrier is extremely cute! He gets away with “murder” most of the time because of his cuteness. He wants to sit with us on the coaches, and we have caught him sleeping on it as well. He jumps like a regular little buck between the coaches. He is forever standing to attention for a scrap of food from the table, but turns his nose at his own food.

He does not do sleeping outside. We have relented every time, because he keeps on bumping against our security gate, and giving loud yelps!  He wants to sleep on beds, and it would have been fine. But he also lifts his leg in the house. I hope we can still teach him – he is an old man at 5/6 years of age!

Our other dog, Petite Peu, is not impressed with the new addition, and jealousy makes her keep guard 24/7 over Benji. To make sure that he does not get more attention than her... Not that Benji gets frazzled! He prances around like a Prince in the house!

The two humps each other every now and again. They are both neutered, so it must be something to do with being the top dog... I think?

In any case: The next time I hear about a dog that is looking for a house; I will be pressing the Forward button, and not Reply! You hear!