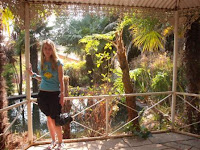 The passport for the teen for the French tour next year. It turns out to be a big headache.


A signature is needed by the dad for his permission for the children to get passports. We got the signature! He signed the form a while ago. Nowhere on the form or on the website does it states that the dad (both parents) needs to be present when going to Home Affairs.

The teen and I went to Home Affairs on Thursday. No, they said! The dad needs to come as well! Oh, brother! The teen is seventeen, and by July next year she won’t have to ask him anything. But the French tour is in April already.

Now, the big question. Should the teen engage with him although she knows he is going to use it as big time leverage? Should she just plain ask him, but no further contact? He could say NO! A “normal dad” would have had no problem with stuff like this. But then, a “normal dad” would still have been in her life…

My divorce settlement states that I have “control and custody”, but unfortunately to them there should have been a word in there of “sole” or “only”. It is the first time that this seems to be a “problem”. Up until now I have made all the decisions with regards the teen.

I do understand the rules with regards passports, but I think there should be some special circumstances that need to be considered. We do not want to give up on her hopes...

(Photo: Arnia at Cedar Lodge in Krugersdorp over the weekend)
Posted by Karen du Toit