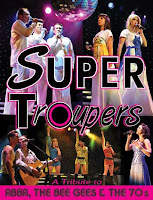 The things you do for your children… Phew! The D-Day for the Fundraiser for the French tour of the French class at school finally happened on Friday. It was nail-biting and worrisome because we (Yvonne, the children and me) were fretting about getting in enough money to pay for the venue and show. Super Troupers, at the Barnyard at Cresta Mall in Johannesburg. Not even about starting to begin raising money for that French tour…


But we made it, and could pay back our due money last Tuesday already. And we made some money extra for the girls as well. We have declared it a success! But never again! You hear!

From now on my head will shake “NO!” when confronted with any misguided attempt of responsibility towards the school.

The things you learn when trying to raise money:


We are very relieved, and very glad about the money raised. The children have a bit more in their banking accounts. It will be able to cover the visas, al least. Every bit helps!

Thanks to everybody who supported us!
Posted by Karen du Toit