Divorces have a devastating effect on the children. No new revelation!
Arnia believed and hoped for years that I and her dad would get back together again and that we would be a family again. We split up when she was 6 and got divorced the next year. Until she was 12 years of age I was blamed for making the move. But she did not know and understand the reasons for the move, and it was only when she herself was confronted with the reality of the situation that she started to make a mind shift. The reality of the situation was that the X was an emotional manipulator, which sometimes moved in the direction of violent aggression. The X was and is a leach that sucks the people dry around him, and do not positively contribute to any environment. The X also did not contribute financially towards his daughter’s upbringing.
That was our story, but we have moved on. We have a new family life, and that is what this blog is all about. New beginnings, every day!
Yes, sometimes it IS better for the children when the parents split! 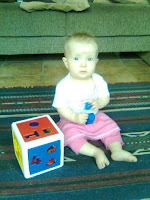 Photo: One of our new beginnings!