The woman looking after Mieka at the crèche had been fired. She was seen giving a baby a hiding. They have closed circuit television, and she was caught red-handed. My first thought was that she was caught having a smoke near a baby, or that she had left the babies on their own. This would have been worse as well. I am thankful that the crèche management reacted immediately.
But, Horrors! I can’t imagine what possesses a person to hit a baby. There is never a reason. What if she had hit Mieka as well? I hate the thought! The thought that we have to trust other people to look after our babies. Damn that I have to work! Do other people feel the same as me? Or am I just feeling down? The working mother’s guilt kicking in again? 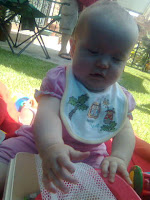 Mieka has got her second tooth. They are coming in one after the other, because we can see them in the gums, all shiny. Luckily it did not affect her very badly. You always hear the scary stories about teeth and babies getting sick. She only has a runny nose, and the sleeping has been going better this week. Margot, it seems we are not going to need the sleep training. (Thumbs crossed!) We are also noticing that she is pivoting on her behind, and sometimes gets on her one knee when she want to reach out to something or someone. Maybe the crawling thing is still going to happen? Self-talk: RELAX, Karen, and enjoy the baby!
Posted by Karen du Toit