A weekend from hell that made us feel very grateful!

We got a call near midnight on Thursday night. The Student was in an accident, and she was still sitting in the car waiting for the ambulance. They were driving on an unknown dark corner of Potch, and there was a turn in the road and the lamp pole jumped in front of them! The car went on it's side before it landed on the wheels again. Unfortunately it was on my daughter's side of the car!

She told us that she knew immediately her arm is broken when she saw it behind her and had to bring it forward...

It was hectic! As a parent you want to jump in the car and race to the scene. But she is a one and half hours away! Luckily we kept talking to her and the friend who was with her in the accident. They kept us in the loop while getting into an ambulance until they were admitted to hospital.

My default mode is going into scold mode before I am able to process it: "What are you doing out so late?" And "Why don't you use the maps on your phone when you know you are prone to get lost?" (She and the friend have lost their way before...)
But if is only for the first few seconds of processing this information...
We were worried and could not sleep!

We got in the car at 6 am on Friday because we thought she would be operated on already at 8 am! Little Miss had to tag along because we did not know if we would be able to fetch her the afternoon. Just as well, because we had to wait until 6 pm for the operation and she only came out of the operating theater after 8 pm on Friday night!

The bones and muscles in the elbow had to be reattached and she has 8 screws and 2 plates in her left elbow!

We could go and fetch her yesterday and she is recuperating at home for the week! 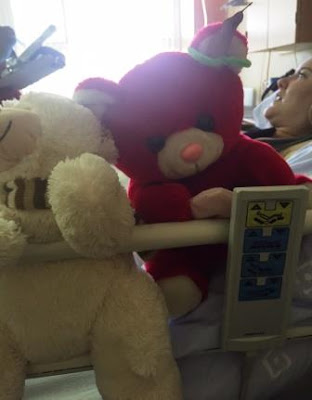 There is so much we are grateful for:

- Except for the arm, both the students are fine! The car is written off!

- The seat belts and airbags saved their lives! There are huge glass pieces sticking into the air bags. They have minimal scratches!

- Medical Aid made everything so much easier. The ambulance took her to a private hospital where she got great care! I did not have to worry about paying exorbitant fees! Everything was covered!

- Student friends allowed us to stay over in their flat for the Friday night! That helped immensely after we left the hospital at ten on Friday night. We stayed until we were sure she was ok.

- Student friends brought her clothes and gifts and visited The Student during the course of the weekend!

- A nice old lady in the same room in hospital who took care of The Student while we could not be around!

- The personnel and staff at Medi-Clinic in Potchefstroom did a great job! Dr Hattingh needs a special mention! It seems he knows what he is doing! He also came to talk to us and her on several occasions and kept us informed. He is also very happy with the operation and believes she will regain the use of her arm!

- It's the left arm that's affected!

- This week The Student also does not have classes and she can stay at home!


Now we have an Iron Woman in our midst!


Do anyone know where we can buy a cover for an arm in plaster?
Apparently Dischem does not stock it anymore and I have phoned one pharmacy at a hospital who also do not have it in stock.
Posted by Karen du Toit