We bought the Jon Bon Jovi tickets last year already, so there was big excitement last weekend when it finally arrived! 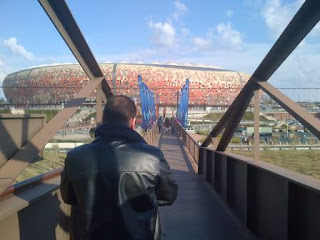 We were not allowed cameras or tablets into the venue, so I had to rely on my very fickle BlackBerry for some photos! (Which died when Jon Bon Jovi came on stage.)

It felt like some sort of survival sitting up high in the icy cold - for hours and hours - but it was worth it!
Even the lung infection afterwards...

Jon Bon Jovi rocked and rocked for hours, and the crowd loved it!
They have a lot of stamina! I am impressed!
The two acts before Jon Bon Jovi also made us proud.
It was Daniel Baron and Elvis Blue.

I have an idea that the  sound quality is better higher up than standing in the Golden Circle, because we did not need any ear plugs. (Maybe I am just jealous! ;-) )

We left the stadium when they were performing the third encore, and we heard afterwards that they went on rocking past twelve. Luckily we were not stuck in traffic! Which we heard were a bit of a headache...