Sofia the First is coming to our screens 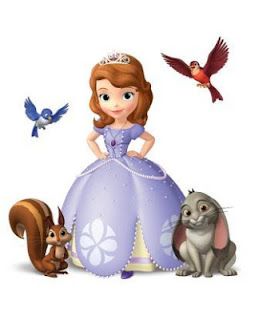 A beautiful  little girl Sofia who suddenly find herself  being called a princess, with all the magic of Disney animation...

We saw the first episode Sofia the First: Once upon a Princess a while back.
It is an extremely enchanting story!
The 4-year old wanted to watch it over and over again! 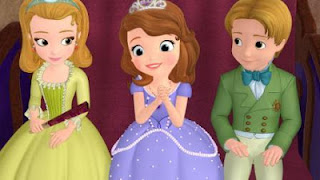 "The animated television series  Sofia the First is set in the storybook world of Enchancia and tells the story of Princess Sofia, an adventurous little girl who is learning how to adjust to royal life after her mom marries the king and she becomes a princess overnight. Upon moving into the castle to live with her new family, including her step-father, King Roland II, and step-siblings Amber and James, Sofia quickly discovers that looking like a princess isn't all that difficult, but possessing the characteristics of a true princess – honesty, loyalty, courage, independence, compassion and grace – is what makes one truly royal. Helping her in her journey are the three headmistresses of Royal Pre Academy, Fauna, Flora and Merryweather (the beloved fairies seen in Disney's classic Sleeping Beauty); the royal steward, Baileywick; and a group of cute woodland creatures led by a wise-talking rabbit named Clover. Classic Disney Princesses Ariel, Aurora, Belle and Jasmine will make special appearances in event episodes to offer Sofia words of wisdom – princess to princess.

Created for kids age 2-7 and their families, the stories are designed to communicate positive messages and life lessons for young children. While she lives in an enchanting fairytale world of castles, wizards and flying horses, Sofia remains a relatable peer-to-peer princess who is experiencing many of the same social situations as young viewers at home, including fitting in at school, building sibling relationships, making new friends, discovering how and when to be brave, learning the importance of telling the truth, and mastering new skills and good sportsmanship." 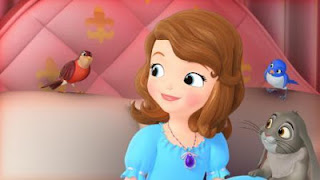 I know of one Princess who will be watching. ;-)