Nerf Fest 2019 was awesome! The girls had so much fun. The competitor activities was all the rage, and the stunning GOG Lifestyle Park added to the fun of the day! This is not a Wordless Wednesday, but here are some of the photos. The heat on Saturday was the only reason we left. It was a scorcher of a summer's day!

There was 4 competitor's areas that the children had to complete. They were in a team of 5 each, and the Nerf Monsters (each team had to choose their own name) did a few good rounds. The last round was in the water area, and it was perfect to cool down after the exercises. The smaller children could also play in a number of areas, but I think it would be great if they get their own competitor slots, with parents running alongside them. A fellow blogger told me her son was so disappointed that he could not yet partake! (Just a suggestion?) 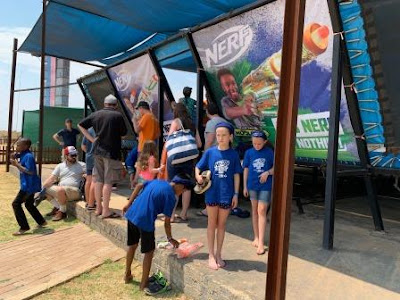 
This is our second year at Nerf Fest, and we vote it as one of the best boys and girls fun activities to do in Joburg.

Boys and girls, are you ready for Nerf Fest?