The Jozi Red Bus with a GeePee card 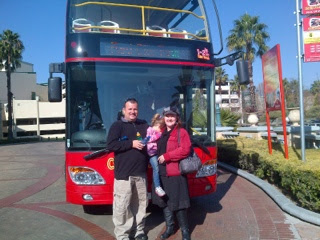 I was so lucky to win a place on the City Sightseeing Red Jozi Bus through Tanya Kovarsky's blog, Rattle and Mum.

They have just launched the "I'm a GeePee" card, which enables one adult ticket two kid's tickets for free!

I have looked into the Red Bus rides before, but have been reluctant because I thought it would become quite expensive if you get off at all the stops.
I have now realized that it is only possible to do about one or two stops in a day.

That means we will be going on a number of these rides!
I want to check out all the stops, and spend some time there.

It is fantastic to drive through the city, with running commentary (in a selection of 10 different languages, with kids commentary as well) about the history and the buildings, without worrying about the destinations, or where to park.
I also love the top vantage point on the bus, looking down on Johannesburg street live.
It is so vibrant and bright and jostling city! Especially on a Saturday!

City Sightseeing Joburg operates on a Hop-On, Hop-Off basis, which means you can get off the bus at any of the designated stops along the route and then jump back on to a later bus at your leisure.

Definitely a number of places to go with the kids!

What a great ride!
Posted by Karen du Toit