Are you really blind? 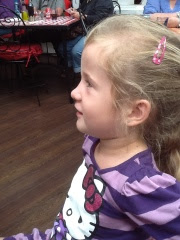 We now have an almost daily discussion about blindness in the car after I have picked up The Little Missy.

I have a blind colleague that I drop off in the afternoons near his home.

He turns his head and looks at her when she is speaking, and he takes the stuff she hands to him.
He does not look blind, and there have been many misunderstandings through the years...
Like people seeing him walking around holding onto different ladies' arms, and thinking him a Don Juan... Or when he walks without a stick in familiar surroundings, and bumping into unsuspecting people.

Little Missy got quite upset in the beginning when she waved at him when he was out of the car already, and he did not wave back. I had to explain that she should say bye before he gets out of the car, or else he would not know that she is waving.

She also wants to know about the walking stick and how it works. To her it seems like some sort of magic wand. That it tells him where he is walking...
I have to tell her each time the stick helps him to know where a wall is, or where the road is!

She comes up with these questions, which he has to answer.
"Why are you blind?"
"Because I had a virus!"

The day before yesterday she loosened a shiny stud from her leggings, and tried to give it to him.
"I have a star to give to you!"
"No thanks, Mieka, you keep it!"
"It is very bright! It will help you to see!"
In the end she threw the stud at him! Luckily it is small and did not hit him!

Later on she said:
"Oom J, jy moet vir jou 'n brilletjie kry!" - You must get glasses!
He just said yes, he will do it!
Posted by Karen du Toit