A Story of Cancer Survival: How I Made It as a New Mother 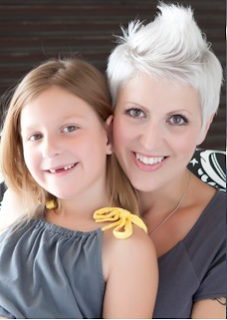 A guest post by Heather Von St. James, who is trying to raise awareness about a deadly little known cancer, which is totally preventable, and also about the dangers of asbestos!

As a mother and friend to many who have been through this challenge, I hope you are never diagnosed with cancer. I was 36 when I was informed that not only did I have cancer, but I had a case so specific that it was going to be a real challenge to overcome. The year that I was diagnosed, I went through extreme highs and lows. The happiest day of my life was when I gave birth to Lily on August 4th, 2005. She was my husband Cameron and I's first and only child. However, just a few months later, we would experience a devastating blow to our new life together.

I had an incredibly smooth pregnancy. Everything leading up to my cancer diagnosis never could have prepared me for what was going to happen. When Lily was born, we brought her home and prepared to share every moment with her, raising her to be a successful and kind woman. I realized soon after we got home that things didn't feel right. I didn't have any energy and often felt as if I was exhausted with the basic tasks. On top of everything, I was losing weight. It grew to be too much, and when I couldn't work any more, I had to go in for tests.

About three months passed before the tests results came in. It was just three days before Thanksgiving. We were in the full holiday swing of preparing for baby's first Christmas as well. Sitting in the doctor's office and listening to him say that I had malignant pleural mesothelioma, I immediately felt myself going into a breakdown. On top of that, I was only given 15 months to live if I didn't go in for treatment right away. I simply couldn't believe it. I stared at my husband, tears in my eyes, shaking, and he realized that I needed help. The doctor was giving us a variety of treatment options, but I couldn't even think straight. All I could see was Lily growing up without a mother and missing all of the memories that I had thought of as a new mother. It was devastating. Cameron, seeing me in my state, listened to each treatment option and knew which one was best right away. I had to see a specialist in Boston who had a history of successfully helping mesothelioma patients.

My treatment was going to be a challenge from the very beginning. The cancer had infiltrated multiple parts of my chest. I had to lose one of my lungs, parts of my heart, chest and diaphragm with a surgery called an extrapleural pneumonectomy. It would take me over two weeks to recover from the surgery in the hospital. Then, I would face the next challenge. I had to go through two months of chemotherapy and radiation. Even then, it was unclear whether I was going to beat mesothelioma. I had the highest of hopes, however. I continuously thought of Lily and how no matter what, I had to be there for her for as long as I could possibly be. It was even more difficult because I wasn't able to see her for many days while I was in treatment. The dreams that I had as a new mother seemed so far away, but I never lost sight of them.

Lily lived with her grandparents during part of my treatment in Boston. Cameron was working full time. Such a sweet man, he was my rock and caregiver during this time. He never wanted me to know what was happening, but he needed help, too. When I went to live with parents and Lily in North Dakota to recover from my treatment, he continued to work and support our family. He was only able to visit once during this time. It was then that help started to pour in from other family members, friends, co-workers, neighbours and even strangers. I met people who had been through similar experiences or knew what it was like to go through cancer treatment, and all of those experiences made me even more hopeful that I would get through cancer treatment and be the mother I needed to be for Lily.

Finally, I started to get ahead of the cancer breaking down my body. With mesothelioma, 95 percent of those diagnosed don't make it. I was able to not only beat cancer, but seven years later, I'm still cancer-free. I can never thank the people who came through for my family enough. They did so much to ensure that we had everything we needed to get through this battle.

Now we have a healthy, beautiful family and a growing seven-year-old girl who just loves to tell people how she saved my life. I can't argue. It was the thought of her that got me through so many tough moments.

More can be read about Heather's story on her blog: http://www.mesothelioma.com/blog/authors/heather/