A discussion about fear 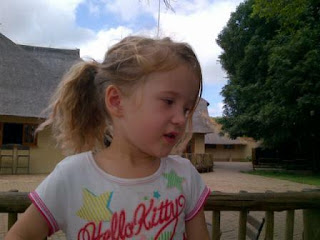 This morning out of the blue I heard the small voice from the back of the car...( I thought she was still sleeping while we were driving to school.)

"I do not have to be afraid (she calls it "skrikkerig" in Afrikaans), because God looks after me!"

I don't know where this statement is coming from, but I confirmed that she has no need to be afraid.
She also said that when she was a baby, she was not as fearful than she is now.

I hope I could convey to her that it is not necessary to be afraid.
(What can I say more than she is safe with us and that there is no reason for her to be afraid?)

I have seen that she is apprehensive and reticent when meeting new people. Last night a friend of my daughter came to visit, and Mieka demanded to be picked up and held when the girl arrived.
She gets almost frantic until she gets picked up! (As if she is in some kind of danger...)

The other definite fearful trigger is of course not wanting to be left alone, and not wanting to sleep alone. She wakes up screaming when she finds herself alone in her bed. And she calls out to us!

I remember being very afraid when I was small, and the eldest also had trouble with the dark.

We try our utmost to go to her, and sleep with her, and we do not leave her on her own. I know how scary it can be lying on your own (I can still recall my own fear of the dark), feeling as if strapped down by the arms (ghosts) in the dark.

I hope we can help her to overcome it sooner rather than later.

It seems all of us go though this phase?
Posted by Karen du Toit