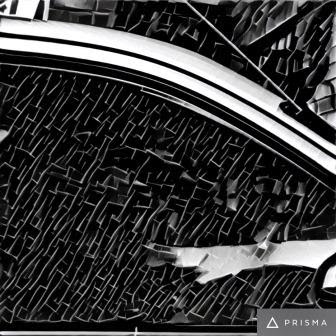 The Eldest was involved in a smash-and-grab the previous weekend. She was coming from friends on a Saturday night at 10 o'clock!

Luckily she is very alert, and she was watching guys across the road which looked suspicious. The next moment there was this huge smash on the driver's seat window! She did not see them at all! She reacted automatically, and drove through the robot just before the robot turned green for the other side! The window was shattered, but it did not fell out! They could not take anything or hijack her!

She was very shaken when she arrived home and felt a bit deflated! Also very despondent about the "assholes" (her word) that dampened her evening!

So she had to go and make a  case at the police station the next day, and had to have the window fixed during the week. She had to pay in the excess of R500 which was also not planned for... All very unwelcome and a lot of schlepp!

But she got a phone call from a very concerned police woman who wanted to know if she is okay and is she got hurt. She was told that the crossing is a hot spot and that lots of people are being smash-and-grabbed there. It touched the Eldest that the police woman seemed to care. How many of these cases do they not get on a daily basis? It was not even a mentionable crime as she was not injured and nothing was stolen... The Eldest said it restored her faith in humanity! She also got the case number within a week, and was notified that a detective was assigned to the case!

And The Mom wants to preach again about going out at night... (But I won't!)


On a totally different note: Check out the cool Prisma app which changes your photos into art works! The picture above was created by using the app.
It's available in the App store and the Google Play store! For free! (The server seems a bit unstable at times, but I can't blame it, as I've got to run through all the filters before I make a choice!)
Posted by Karen du Toit