A stunning spectacular for the whole family: Mystic India

We were invited to the launch of Mystic India at The Teatro at Montecasino on Tuesday night!
It starts today, 29 April until the 1st of May. (Why for such a short time?)
It is stunning!
It is spectacular!

Go see it!! You won't be disappointed!
(I would take my Littlest and Eldest as well!)


I have always had a fascination with Indian music. My mother worked with an Indian co-worker while I was still at school, and he used to send me the latest Indian music of the time (1980s oh boy!). I was mesmerized! We also came across many belly-dancing techniques from the Indian dance move culture while I was busy doing belly dancing classes. The Indian culture is rich and fascinating!


"Seen by over half a million people during countless worldwide performances and tours, Mystic India is an internationally acclaimed Bollywood music and dance spectacular based on the concept of ancient India’s transition into modern India.

Featuring some 22 talented musicians, brilliant dancers, mind-boggling aerialists and acrobats, as well as 750 lavish costume changes, the show is bound to keep you at the edge of your seat. The flamboyant costumes and extravagant sets have been custom-designed in India’s film capital by a team of 40 creative designers and collaborators over the course of the last four years.

This production intertwines a mesmerising combo: Traditional India meets the urban streets of Mumbai and New York. It is hip and trendy with all the glitter and bling to make it an all-out sensory sensation. This feast showcases Bollywood at its finest and audiences can brace themselves for an explosion of colour and energy.

Audience members will be invited along for a festive journey through Rajasthan, Tamil Nadu, Maharashtra, Punjab, Uttar Pradesh and Gujarat, and even through the evolution of Bollywood films via a visual display that fuses dance, theatre and special effects."

My photos does not do it any justice! 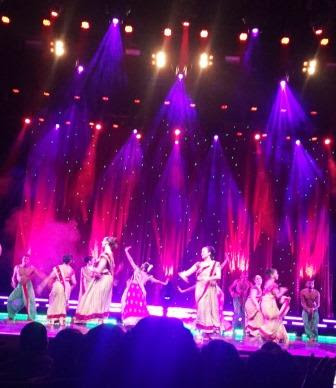 Just go and see it!


Hubby and I made it a date night, and tried out Deena's Aarya at Montecasino. It was our first time there! (definitely not the last)
The Indian curry paired very well  with the show! 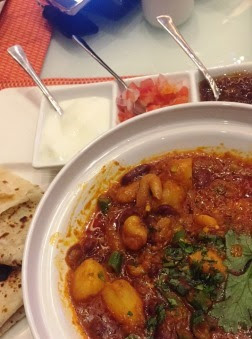