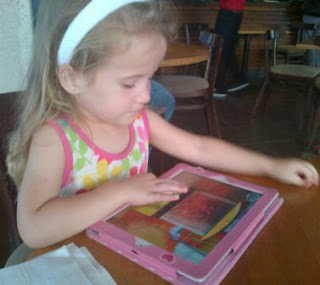 Everyone who knows me, or have read some here, knows that I am extremely excited about the use of tablets at school.
iPads for children are really the next big step to revolutionize the education systems, worldwide, but specifically here!

Yes, for us here in South Africa it is still a new thing.
My Little Missy's schools does not have the technology incorporated at the moment! But there are some positive moves in the right direction...

I am excited about ZA Books, the eTextbook solution for South African schools that was launched a couple of weeks ago. There is an app available for the South African curriculum on your iPad.

I got excited last year when Apple in Education had their awards evening, and I learnt that 72 schools have already taken part in the competition, and to see how creative the children are with the technology!

One of the things that gets asked most is about the language barriers for children. I have found that the children does not see it as a barrier at all, and that our Afrikaans speaking children do not have a problem with it.

I attended Afrikaans the iPad way session at the iStore on Monday.
Liande Engelbrecht is the Afrikaans teacher at Redhill School who uses the iPad to make Afrikaans alive to the children.


I was amazed to hear that she does not suggest the apps to use, but mostly gives an assignment, and the children comes up with their own solutions on the iPad.

The apps that they are using in the Afrikaans class are as follows:

You will notice that most of the apps are not in Afrikaans, but are used for Afrikaans language teaching.
The children demonstrated how they used the apps, and showed us some of their work.
Very inspiring.
I have since downloaded some of the apps myself to test it out. ;-) (Feeling like a tech geriatric!)

One other interesting fact is the way how the children handle these devices.
Because it is so very expensive, and because it is expensive to repair, they take care of it!
Their school has built in a system of training of how to handle the devices, and they have lockers for it!

Another interesting development is that iPad Genius Clubs are being launched at schools. The children manage the iPad labs, and the training is for free.


I love the technology that's available now to our children!