Who makes The Poofiest Pong? 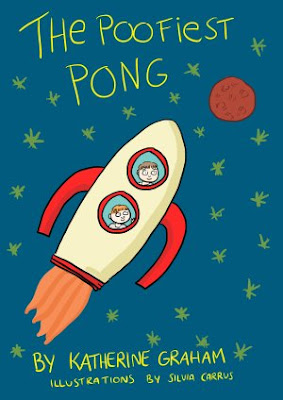 Katherine Graham has written the cutest little book about farts and outer space adventures. It is perfect for children age 4 - 8 years! What kid does not think a fart is a hilarious thing?

A journalist by training, Katherine writes regularly for a number of South African publications, including a monthly finance column for kulula's in-flight magazine. She has published three children's e-books, The Dummy Fairy, Alfonso the Tooth Mouse and The Poofiest Pong, all available on Amazon. The Lemon Tree, which was longlisted for the Golden Baobab Prize in 2014, is due to be published by Penguin Random House next year. She lives in possibly the world's most beautiful city, Cape Town, is married with two boys and a ginger cat, and loves peaceful, uninterrupted moments sipping tea and reading.
Visit her blog at www.wordcount.co.za

How do you measure the poofiness of your pongs? This is a question that baffles Max, the budding inventor. But with the help of his pong-o-meter and his little brother's farts, Max and Billy are well on their way to blasting off for an adventure in outer space.


Here is a snippet from the book:

Billy Burnham makes the poofiest pongs. I should know, he's my little brother.

Mom only occasionally farts. She is loud and proud. When she's made one, she giggles and says, “Sorry”. But we don't actually mind because they don't really stink.

Mine are also quite mild. There's a bit of a pong, but it doesn't hang around very long, and I always move into another room before anyone can pick it up.

But Dad's farts – boy, are they something! They are the kind of stinks that you can't get away from. He is silent but violent. If you're in a room full of people, they start to look around and screw up their noses. “Who did that?” they ask with questioning eyes. Dad's stinks are bad.

But Billy, my brother, takes the cake. He may not be very big, but his baffs pack the meanest punch. They are toxic. They are like stink bombs that go off and color the air green. Like sodium sulfide, Dad says. If Billy toots at the dinner table, you may gag on your food. They are his nuclear weapon.
One day I get an idea. “Eureka!” I shout. “There must be a way to measure farts. I know, I'll invent a machine... a pong-o-meter!”


I have downloaded the book from Amazon for $2.99.
I could not download it to my Kindle, because it says it is not supported (I have an older version Kindle), but there was no problem opening it up on my iPhone and my iPad.
Little Miss loves it!
Posted by Karen du Toit