Adventures with a tooth mouse 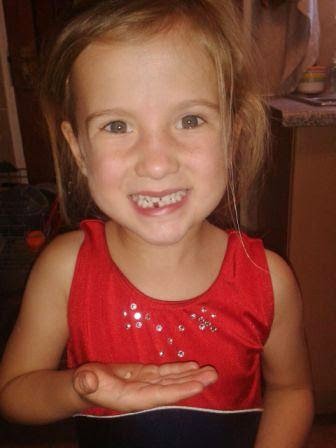 The bottom tooth, Tooth number two,  has been loose for quite a while, and every now and again it was a whole upheaval when she had bitten on something. But we could not get near enough to it to pull it.
On Saturday the final straw was when there was blood. Dad tried to pull the tooth with tooth floss, but could not get in there for long enough to take it out. Mom was summoned as a last resort. The tooth came loose without even pulling on it! It was a huge relief!

The tooth was put in a bag, and put underneath her cushion in her bed. I don't know why we did not tell her to put it in a shoe? There is an ad going around now about a little girl with a teeth underneath her cushion, but she only got a coupon the next day.  That must have influenced Little Miss?

On Saturday afternoon while tidying up I discovered that the ants are marching to Little Miss's bed, and on closer inspection I found a dead moth underneath her cushion. I had to vacuum everything.
As I was placing the bag with teeth back underneath her cushion, I could not see the tooth and was starting to panic. But it was still there! It is just so VERY small!

It was a very musical-beds kind of night, with Dad and me swapping places in Little Miss' bed. She was keeping on checking the tooth. I got out of her bed just before six. I had managed to secure the tooth and gave it to Dad. Dad was on his way to sort the tooth mouse, when Little Miss woke up. She was very upset that the tooth was gone and there was no money.

I managed to convince her that it is still very early and that we must give it some time...

Dad could take the coins and note to Little Miss. She was much impressed with the R9 ($0.82) in coins, and immediately saved it for her trampoline that she wants in the garden. (Still don't know where we are going to put it?)

We later on found another note by the tooth mouse. (There was a bit of a misunderstanding, and Big Sister also did her part.)
It would have made it a lot easier...

Next time, we are definitely putting it in the shoe!


Do you have special holder for the tooth, or where do you put it?