Traffic and floods - I wish there was an Auntie Traffic

I phoned my dear husband last night in traffic, after we had been moving two metres every two minutes, and there was no end in sight... He wanted to make a few suggestions of how to get out of there! But it was impossible! I was stuck in four lanes - which became two lanes, which became one lane - going very slowly towards a flooded area in the road on Barry Hertzog.

I said I was just complaining!
I just wanted to tell someone! 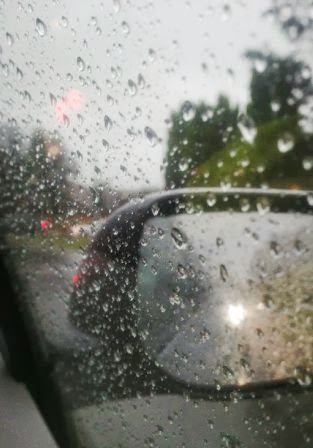 I wish there was an Auntie Traffic that I could direct my complaints to? @EWNTraffic and @PigSpotter and @TrafficSA just doesn't do it for you! The best is when they retweet one of our tweets, but most of the times it is the same as swearing through closed windows at the taxis coming past in the wrong lane and sneaking back in front of you! (Which happens every day in any case! Just more so when there are rains and floods and back-up traffic on the road.)

We went through this water last night, and my car gave a little flicker, but it made it to the other side.
High five!
Never again! (If I can help it!)


Thanks for listening! I needed to get a complaint in somewhere!


How is your traffic each day?
Posted by Karen du Toit