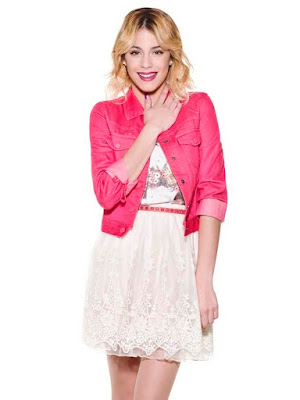 Violetta's third season is starting with premiere episodes on weekdays from 16 November at 16:10
(Disney Channel 303).
The story of Violetta fits into the tweens bracket, from the 8 to 14 year olds.

We have not been following the series, but I'm sure Little Miss will start showing an interest very soon!

There will be a new episode of the show that discusses all things Violetta, called I Love Violetta, which will be airing immediately before the movie Full Out on Friday 20th November at 17:00.

The storyline in Season 3 of Violetta:

"This season continues from where season two left off, with Violetta still trying to cope with life, love and her singing career.

YouMix’s triumphant world tour draws to a close in Europe, and the students head back to Buenos Aires for their final year of classes. They have had a wonderful time, but now have new dreams and ambitions, as well as new challenges and obstacles to face. Some can fulfil their musical ambitions in the studio, while the dreams of others can be realized elsewhere. Meanwhile, as familiar characters return, there are also new people on the scene.

Violetta is very happy – at last she is able to work on her beloved music, and her relationship with Leon couldn’t be better. However Ludmila is still plotting and scheming, determined to take Violetta’s place in YouMix. Then Violetta’s life takes an unexpected turn when German falls in love with Priscila, a woman who will unknowingly turn Violetta and her family’s world upside down."

5 Violetta Hampers are up for grabs: 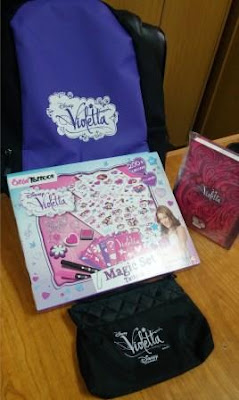 Please comment below and tell me who is playing the star of the show?

The answer can be found here: Disney Channel: I love Violetta

Only open to South African residents.

The draw will take place this week on Friday 13 November at 9 am.


This giveaway is now closed!