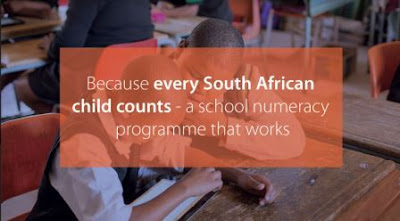 I love that the iSchoolAfrica programme is still going strong in South African schools.
(I have been wishing and asking that my daughter's schools would implement it.)

iSchoolAfrica was founded in 2009 by the Core Group empowering teachers and learners by giving them access to the world's most advanced educational technology (iPads and Macs) and classroom practices. iSchoolAfrica still sounds to me like the most solid and all-encompassing way to help children prepare for a new future where new careers are born daily and old careers are becoming obsolete!

I was invited to a breakfast last week about the iSchoolAfrica Numeracy Programme.

iSchoolAfrica Numeracy Programme breakfast @ischoolafrica #numeracy The project’s vision is that every primary school learner attains core competency skills a foundation for life skills that supports them in achieving their full potential.
A post shared by Karen Du Toit (@karentoittoit) on Feb 28, 2017 at 10:47pm PST

The iSchoolAfrica programme is addressing the Numeracy crisis in our primary schools with the onebillion software. The project was started by onebillion and VSO in order to improve the primary school education for children in developing countries.

The countries involved so far in the onebillion initiative is Malawi, South Africa, United Kingdom, Tanzania and Brazil. The University of Nottingham is involved with evidence-based research regarding this initiative. Studies by them have shown children making 18 months' progress in only six weeks. Real-time remote monitoring of children's progress ensures learning is taking place and the teachers receives immediate feedback.

The onebillion apps are available in the App Store and the Google Play Store.

Little Miss is still playing testing the apps. Although it starts on a younger age, we were told that she could progress very fast until she gets to her level. iSchoolAfrica is using these apps until Grade 4 in the schools. Some of the apps are already available in Afrikaans and isiZulu. (After downloading the app, you have the option to select your language of preference)

Sponsorships from a great many partners help to bring iSchoolAfrica to struggling and rural schools.

Go and check out the apps, and start with the free versions that's available.

- Why it is not a good idea to bring your own device to school? #BYOD #iPadLearningZA

- iPads in Education - I want to be a teacher now!